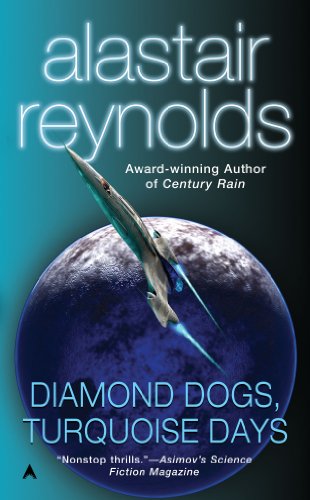 Alastair Reynolds returns to his bestselling Revelation Space universe with two novellas of interstellar exploration. Now experience the phenomenal imagination and breathtaking vision of ‘The most exciting space opera writer working today’ (Locus) in two tales of high adventure set in the same universe as his novels. ‘Diamond Dogs’, first published in INFINITIES, tells of a group of mercenaries trying to unravel the mystery of a particularly inhospitable alien tower on a distant world; ‘Turquoise Days’ features Clavain, the Conjoiner star of REDEMPTION ARK.

“Diamond Dogs”
The planet Golgotha—supposedly lifeless—resides in a remote star system, far from those inhabited by human colonists. It is home to an enigmatic machine-like structure called the Blood Spire, which has already brutally and systematically claimed the lives of one starship crew that attempted to uncover its secrets. But nothing will deter Richard Swift from exploring this object of alien origin…

“Turquoise Days”
In the seas of Turquoise live the Pattern Jugglers, the amorphous, aquatic organisms capable of preserving the memories of any human swimmer who joins their collective consciousness. Naqi Okpik devoted her life to studying these creatures—and paid a high price for swimming among them. Now, she may be the only hope for the survival of the species—and of every person living on Turquoise…