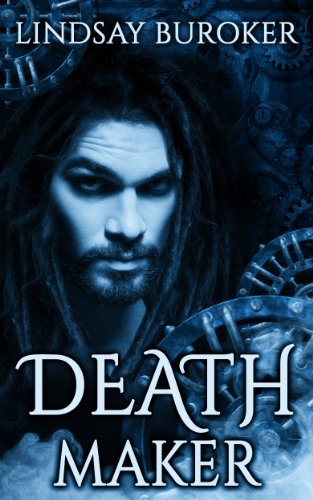 When Lieutenant Caslin Ahn joined Wolf Squadron, she was prepared for the reality that she might one day be killed in the line of duty. She was less prepared for being shot down, assumed dead by her own people, and dragged off to the Cofah Empire as a prisoner of war. As if being thrust into a dungeon and interrogated wasn’t bad enough, the sadistic commandant decides to give her a cellmate: the notorious pirate Deathmaker. Given the crimes he’s committed against Iskandia, Cas owes it to her people to try and kill him.

Part warrior and part scientist, Tolemek “Deathmaker” Targoson has not only slain thousands with his deadly concoctions, but he has a special loathing for Iskandian pilots. It was Ahn’s commander, Colonel Zirkander, who ruined his military career, forcing him to leave his country in shame and join a pirate organization. Years later, he uses his dreadful reputation like a shield to keep people away; all he wants is to be left alone to work in his laboratory. But when fate lands him in a cell with Zirkander’s protégé, he sees a chance for revenge. Why kill the lieutenant when he can use her to get to his old nemesis?

There’s just one problem: it’s hard to plot against your enemies when you’re in prison with them. Cas and Tolemek will have to work together if they hope to escape the Cofah dungeon. In the process, they may find that neither is what the other expects, and that they have far greater problems to worry about than ensnaring each other…
Deathmaker is a full-length 85,000-word novel. It is set after the events in Balanced on the Blade’s Edge, but it can be enjoyed even if you haven’t read the first book.