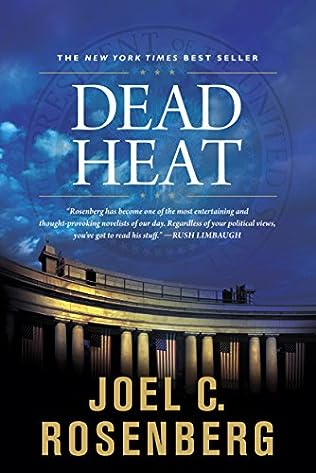 For Jon and Erin Bennett, the world seems to be spinning dangerously out of control. A new dictator is rising in Iraq. China is making threatening new moves toward Taiwan. North Korean forces appear ready to strike south. Israel is feverishly trying to complete the Third Temple. Oil prices are surging.

Dead Heat, in just the first chapters, opens with the nuclear bombing and annihilation of four major US cities: Washington DC, New York, Seattle, and Los Angeles where the GOP convention is just about to announce that the President of the United States is about to address the gathering to announce his endorsement of the new republican candidate for President of the United States. Someone is clearly trying to not only kill the President but also totally and completely destroy our government.

And in the wake of a horrific war in the Middle East, President James MacPherson’s second term is coming to an end. Now the battle to succeed him is heating up into one of the most fiercely contested presidential elections in American history, and the Bennetts realize the stakes could not be higher. Who will lead a bitterly divided country over the next four years? What can the U.S. do to shape the new world order?

And just what role–if any–does the U.S. play in the last days? As the presidential campaign narrows into a dead heat, the Secret Service learns of a catastrophic plot to assassinate one of the candidates–but which one, and can the terrorists be stopped in time?