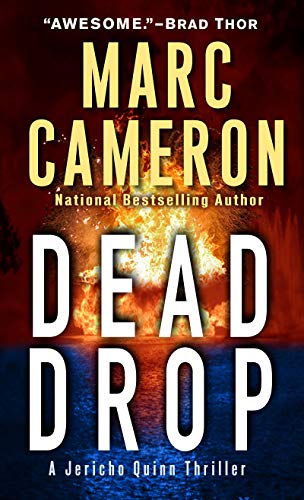 DEAD IN THE WATER

Marc Cameron is back with a short  novella addition to the Jericho Quinn series.

Amusement Park gone gruesome, thanks to terrorists intent on creating as much carnage and death as possible, hopeful of media coverage that would immortalize their deaths and bring glory to their cause.

Every summer, thousands of families head to the nation’s largest water park, famous for its 21-story waterslide the “Dead Drop.”

After a harrowing meeting with POTUS, Jericho Quinn and Jacques Thibodaux have agreed to take their respective families to the Buccaneer Beach Thrill Park, home of the Dead Drop waterslide.

This year, one other visitor didn’t pack his bathing suit. He packed explosives. When the bomb goes off, dozens of people are instantly killed. The rest are herded into the park’s massive pool by the bomber’s accomplices.

An organized team of fanatical but well-trained terrorists, they seal off the entrances, turn the waterslide into a watchtower, and train their sights on the families below. But one hostage isn’t playing along. He’s special agent Jericho Quinn. He’s on vacation with his daughter. And he’s about to turn this terrorist pool party into one righteous blood bath . . .