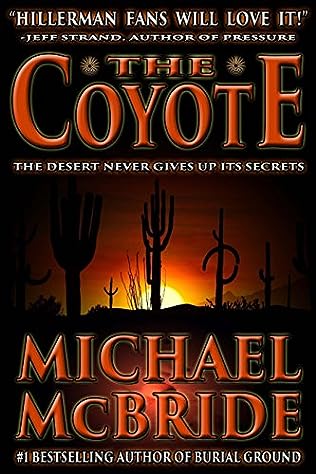 The new novel of suspense from the category bestselling author of Burial Ground and Vector Borne!

Arizona shares nearly four hundred miles of international border with Mexico, thirty-six of which are completely unfortified. On one side lies desperation; on the other, opportunity.

There’s no record of their destinations.

Tens of thousands of undocumented aliens pass through these thirty-six miles every year, only to find one of the harshest and most inhospitable deserts on the planet waiting for them.

No one knows where to look when they disappear.

Hundreds die walking, casualties of the merciless sun, their bodies never to be identified. Others simply set out across the red Sonoran sands and vanish into thin air.

It’s as though they never existed at all.

Special Agent Lukas Walker is assigned to investigate a murder, the only evidence of which is a twenty-foot design painted on a rock formation in the victim’s blood. He quickly learns that if the heat doesn’t get you…

The Coyote by Michael McBride takes place in Tohono O’odham Nation reservation in Arizona. There appears to be a serial killer leaving blood paintings on rock walls on the reservation but missing the bodies that the blood belongs to. Special Agent Lukas Walker is brought in on the case, but not just for his extraordinary skills as an agent. This was his father’s homeland and these are his people; even if they are people he has never met before.