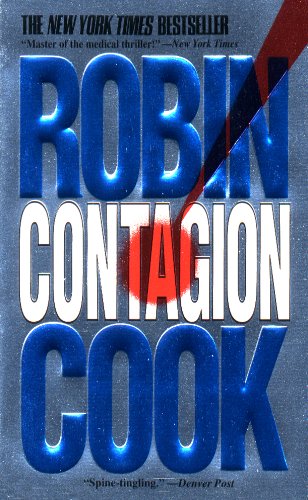 One of Cook’s most successful–and timely—bestsellers. Contagion is a terrifying cautionary tale for the millennium as a deadly epidemic is spread not merely by microbes—but by sabotage…

After losing his ophthalmology practice to a for-profit medical giant, Dr. John Stapleton retrains in forensic pathology. When a series of virulent and extremely lethal illnesses appears on the scene, Stapleton traces the cause of the outbreak to the same corporation that cannibalized his practice.

Embittered, Stapleton retrained in forensic pathology and established himself in the impersonal, concrete anonymity of New York. Gradually, his life seems to get into calmer waters again. Until the moment a whole series of fierce and extremely deadly diseases affect young and old, with a fatal influenza epidemic as absolute climax.

Stapleton’s suspicion is aroused, especially when it can be shown that the hearths are located in hospitals and clinics that fall under the responsibility of the same ruthless medical giant that at the time meant the end of his own medical practice … Together with the successful businesswoman Theresa Hagen, Stapleton unravels the bewildering truth. They find a devilish conspiracy of really catastrophic proportions ..