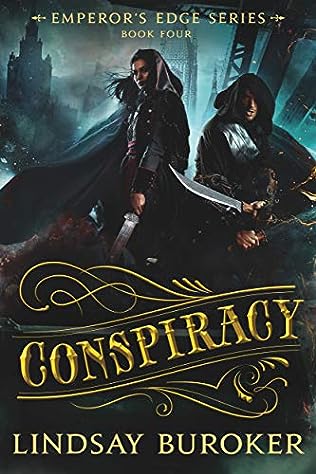 When you’re an outlaw hoping for a pardon, and the emperor personally sends a note requesting that your team kidnap him, you make plans to comply…

Even if it’ll involve infiltrating a train full of soldiers, bodyguards, and spies loyal to a nefarious business coalition that has numerous reasons to hate you.

Even if it means leaving the city right after you’ve uncovered a secret weapons shipment that might be meant to start a war.

Even if it’s a trap…

This book delves into the mind of Akstyr, as the story is told from his point of view. He’s lazy, grumpy, selfish, immature, difficult and more than a little traitorous. Amaranthe didn’t win him over as easily as she did the others. After the emperor employs Amaranthe’s crew to kidnap him, our heroine decides that the moment is perfect for this mission when the emperor travels by train.