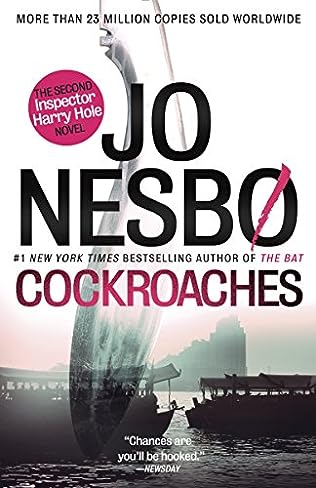 The thrilling sequel to Jo Nesbo’s debut novel, The Bat, The Cockroaches sees Harry Hole sent to Bangkok to investigate the murder of the Norwegian ambassador.

When the Norwegian ambassador to Thailand is found dead in a Bangkok brothel, Inspector Harry Hole is dispatched from Oslo to help hush up the case.

But once he arrives Harry discovers that this case is about much more than one random murder. There is something else, something more pervasive, scrabbling around behind the scenes. Or, put another way, for every cockroach you see in your hotel room, there are hundreds behind the walls. Surrounded by round-the-clock traffic noise, Harry wanders the streets of Bangkok lined with go-go bars, temples, opium dens, and tourist traps, trying to piece together the story of the ambassador’s death even though no one asked him to, and no one wants him to—not even Harry himself.

When Harry lays hands on some CCTV footage that will help him unravel what happened that night, things only get more complicated. The man who gave him the tape goes missing, and Harry realizes that failing to solve a murder case is by no means the only danger in Bangkok.