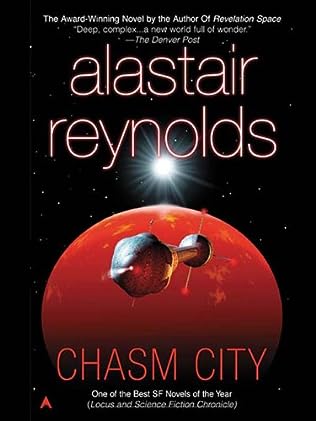 The once-utopian Chasm City -a doomed human settlement on an otherwise inhospitable planet- has been overrun by a virus known as the Melding Plague, capable of infecting any body, organic or computerized. Now, with the entire city corrupted -from the people to the very buildings they inhabit- only the most wretched sort of existence remains. For security operative Tanner Mirabel, it is the landscape of nightmares through which he searches for a low-life postmortal killer.

But the stakes are raised when his search brings him face to face with a centuries-old atrocity that history would rather forget.

Tanner Mirabel was a security specialist who never made a mistake – until the day a woman in his care was blown away by Argent Reivich, a vengeful young postmortal. Tanner’s pursuit of Reivich takes him across light-years of space to Chasm City, the domed human settlement on the otherwise inhospitable planet of Yellowstone. But Chasm City is not what it was.

The one-time high-tech utopia has become a Gothic nightmare: a nanotechnological virus has corrupted the city’s inhabitants as thoroughly as it has the buildings and machines. Before the chase is done, Tanner will have to confront truths which reach back centuries, towards deep space and an atrocity history barely remembers.