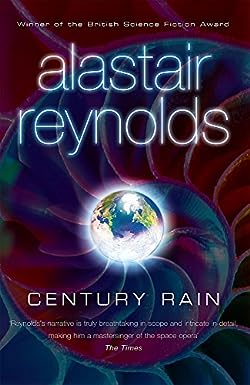 Three hundred years from now, Earth has been rendered uninhabitable due to the technological catastrophe known as the Nanocaust. Archaeologist Verity Auger specializes in the exploration of its surviving landscape. Now, her expertise is required for a far greater purpose. In 1959 Floyd, a private detective, is hired to investigate an apparent suicide which Floyd‘s client believes to be murder most foul. The investigation uncovers some very strange facts about the dead girl.

After a field-trip to goes badly wrong, Verity is forced to redeem herself by participating in a dangerous mission, for which her expertise in invaluable. Using a backdoor into an unstable alien transit system, Auger’s faction has discovered something astonishing at the far end of a wormhole: mid-twentieth-century Earth, preserved like a fly in amber.

Something astonishing has been discovered at the far end of a wormhole: mid-twentieth century Earth, very well preserved. Somewhere on this alternate planet is a device capable of destroying both worlds at either end of the wormhole. And Verity must find the device, and the man who plans to activate it, before it is too late—for the past and the future of two worlds…