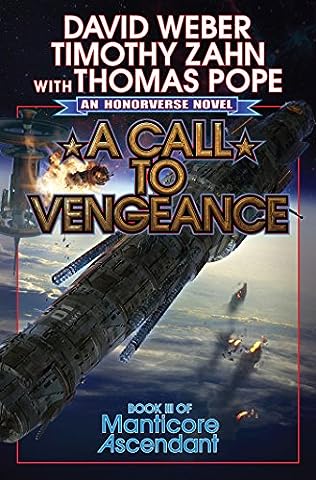 Book 3 in the Manticore Ascendant series (2018)

After the disastrous attack on the Manticoran home system by forces unknown, the Royal Manticoran Navy stands on the brink of collapse. A shadowy enemy with the resources to hurl warships across hundreds of light years seeks to conquer the Star Kingdom for reasons unknown, while forces from within Manticore’s own government seek to discredit and weaken the Navy for reasons very much known: their own political gain.

It’s up to officers like Travis Long and Lisa Donnelly to defend the Star Kingdom and the Royal Manticoran Navy from these threats, but the challenge is greater than any they have faced before. Weakened but not defeated, the mercenary forces and their mysterious employer could return at any time, and the anti-Navy faction within Parliament is growing. The situation becomes even more dire when fresh tragedy strikes the Star Kingdom.

While the House of Winton faces their enemies at home, Travis, Lisa, and the other officers of the Royal Manticoran Navy must reunite with old friends and join new allies to hunt down and eliminate the forces arrayed against them in a galaxy-spanning conspiracy.

Manticore has learned that the universe is not a safe place, but the Star Kingdom’s enemies are about to learn a lesson of their own!