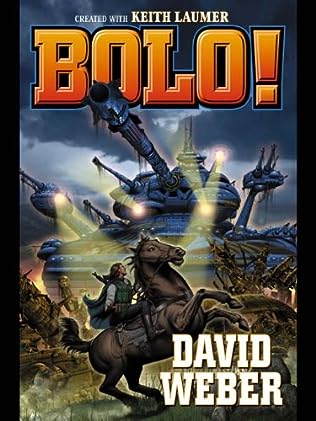 Controlled by their tireless electronic brains which were programmed to admit no possibility of defeat, the gigantic robot tanks known as Bolos were almost indestructible, and nearly unstoppable. Their artificial intelligences were designed to make them selflessly serve and protect humans throughout the galaxy and made each Bolo the epitome of the knight sans peur et sans reproche, and often far more noble than the humans who gave them their orders.

Now, David Weber, New York Times best-selling author of the Honor Harrington series, continues the history of the Bolo, in four short novels, one of them published here for the first time. One Bolo is driven over the edge by the very humans it is pledged to protect. Another Bolo must decide whether or not to disobey when it is given an order that constitutes genocide. A third must hunt one of its own kind whose robot brain is damaged and rescue two children which the deranged Bolo thinks it is protecting from a nonexistent enemy.

And more, including as a bonus, David Weber’s own authoritative technical history of the Bolo, all in a volume that will be irresistible both for David Weber’s huge readership and Bolo fans everywhere.