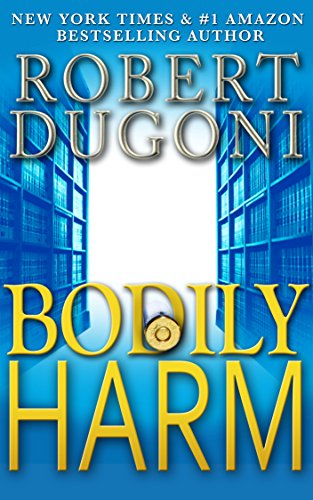 Bodily Harm opens with a big win for David Sloane and his new partner, Tom Pendergrass, in a malpractice case centered on the death of a young child. But on the heels of this seeming victory, an unlikely character—toy designer Kyle Horgan—comes forward to tell Sloane that he’s gotten it all wrong: Horgan’s the one who’s truly responsible for the little boy’s death and possibly others—not the pediatrician Sloane has just proven guilty.

Ordinarily, Sloane might have dismissed such a person as a crackpot, but something about this case has always troubled him—something that he couldn’t quite pinpoint. When Sloane tries to follow up with Horgan, he finds the man’s apartment a shambles— ransacked by unknown perpetrators. Horgan has vanished without a trace. Together with his longtime investigative partner Charles Jenkins, Sloane reexamines his clients’ son’s death and digs deeper into Horgan’s claims, forcing him to enter the billion-dollar, cutthroat toy industry. As Sloane gets closer to the truth, he trips a wire that leads to a shocking chain of events that nearly destroys him.

To get to the bottom of it all and find justice for the families harmed, Sloane must keep in check his overwhelming desire for revenge. Full of nail-bitingly tense action scenes as well as edge-of-your-seat courtroom drama, Bodily Harm finds Robert Dugoni at the very top of his game.