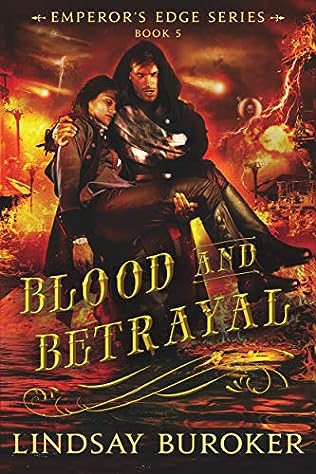 The last thing Maldynado Montichelu—former aristocrat and current ladies’ man—ever wanted was to be left in charge. After all, the team just blew up a train, crashed a dirigible, and kidnapped the emperor. It’s kind of an important time.

But, with Amaranthe captured by the nefarious Forge coalition, and Sicarius off to find her, the team is lacking in leaders. Also, Sicarius has made it clear that Maldynado’s life may be forfeit should anything happen to the emperor while he’s gone.

To make matters worse, Forge’s cutthroats are after Sespian, and the young emperor believes Maldynado’s loyalties are suspect. As if it’s his fault that his older brother is working with the coalition to usurp the throne. If Maldynado can’t figure out how to earn the emperor’s trust quickly, Sespian will go off to confront their powerful enemies on his own.

Meanwhile, Amaranthe must find a way to escape from the coalition’s newest ally, Master Interrogator Pike, a man who plans to pull all of the secrets from her head, one way or another…

Blood and Betrayal is the fifth novel in The Emperor’s Edge series.