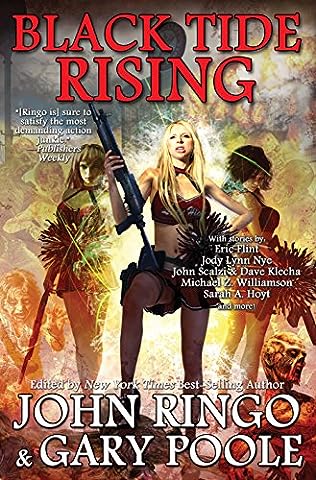 he news that humanity had been dreading for ages had come true. Zombies are real. Worst of all, we created them. The apocalypse was upon us, and every man, woman and child had to answer a simple question of themselves: “What do we do now?” For a group of neighbors in the Chicago suburbs of Northern Indiana, it was “work together or die”…and figure out how to live on top of oil storage tanks to keep the zombies at bay.

For the Biological Emergency Response Teams in New York City, it was “how long can we fight off the infected before it’s too late” . . .as well as having to fight other groups all out to claim a dwindling stock of supplies and safety. And for a group of cheerleaders, it was about the end of their world. And about what happens when you get a group of physically fit young women really, really angry.

Featuring original stories from some of the brightest stars in the science fiction universe:
“Never Been Kissed” by John Ringo
“Up on the Roof” by Eric Flint
“Staying Human” by Jody Lynn Nye
“On the Wall” by John Scalzi & Dave Klecha
“Do No Harm” by Sarah A. Hoyt
“Not in Vain” by Kacey Ezell
“How Do You Solve a Problem Like Grandpa?” by Michael Z. Williamson
“Battle of the BERTs “by Mike Massa
“The Road to Good Intentions” by Tedd Roberts
“200 Miles to Huntsville” by Christopher Smith
“Best Laid Plans” by Jason Cordova & Eric S. Brown
“The Meaning of Freedom” by John Ringo