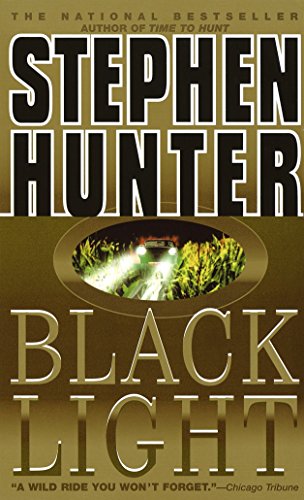 Forty years ago, Bob Lee Swagger’s father, a state trooper, was killed by two robbers in an Arkansas shoot-out. Now a young writer has arrived at Swagger’s door with some penetrating and troubling questions. What really happened that long-ago Arkansas night?

The powers that be don’t want that question answered, but Swagger, to his surprise, finds that he does — even if it means having to use his long-abandoned combat skills and cunning to find out. Like the infrared “black light” that exposes a sniper’s target in the night, Swagger homes in on the shadowy figures desperate to keep the secret of his father’s murder buried.

Only one thing stands between a son and his father’s killer: forty years of lies.

On a remote Arizona ranch, a man who has known loss, fear, and war weeps for the first time since he was a child. His tears are for the father taken from him four decades before in a deadly shoot-out. And his grief will lead him back to the place where he was born, where his father died, and where a brutal conspiracy is about to explode.

For Bob Lee Swagger, the world changed on that hot day in Blue Eye, Arkansas, when two local boys rode armed and wild in a ’55 Fairlane convertible. Swagger’s father, Earl, a state trooper, was investigating the brutal murder of a young woman that day. By midnight Earl Swagger lay dead in a deserted cornfield.

Now Bob Lee wants answers. He wants to know the truth behind the shoot -out that took his father’s life, a mystery buried in forty years of lies. Because for Bob Lee Swagger, the killing didn’t end that day in Blue Eye, Arkansas. The killing had just begun…

Weaving together characters from his national bestsellers Point of Impact and Dirty White Boys, Stephen Hunter’s gripping thriller builds to an exhilarating climax–and an explosion of gunfire that blasts open the secrets of two generations.