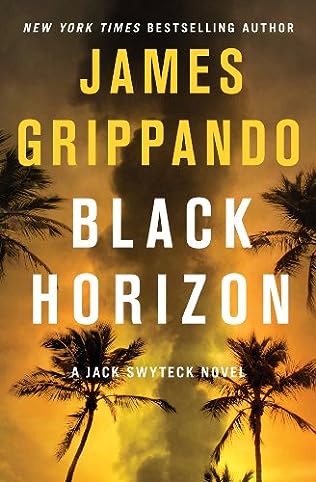 In Black Horizon, a riveting and timely thriller drawn from tomorrow’s headlines, New York Times bestselling author James Grippando brings back popular Miami criminal defense attorney Jack Swyteck in an international case involving a devastating oil spill that pits him against his most villainous adversaries yet.

Three summers after the Deepwater catastrophe-the biggest man-made environmental disaster in history-oil is again spewing into the ocean, from a drilling explosion in Cuban waters just 50 miles away from the Florida Keys. The situation is politically complex, involving a state-run consortium tied to the Venezuelan, Chinese, and Russian governments, and highly volatile. The Cubans not only refuse offers of American assistance but threaten to fire on “hostile” U.S. vessels that enter their waters.

Attorney Jack Swyteck and his new wife, Andie, an operative for the CIA, are honeymooning in the Keys when Andie is called away on an undercover assignment. Jack, too, is soon back at work-representing a client whose husband was on the rig. Though the spill occurred in foreign territory, the widow wants Jack to file a wrongful death suit in U.S. court. Pursuing the unimaginably complicated case plunges Jack into a dangerous world filled with treacherous twists that lead him to a shocking realization . . . his case and Andie’s assignment may be lethally connected.