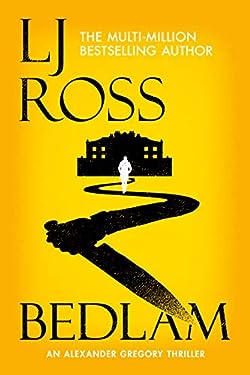 From the international number one best-selling author of the DCI Ryan Mysteries.

LJ Ross is a self-published literary sensation whose books have sold over four million copies in paperback, ebook and audio. We are proud to bring her work to libraries for the first time.

In a world gone mad, who can you trust?

Fresh from a high-profile case in the Paris fashion world, elite forensic psychologist and criminal profiler Dr Alexander Gregory receives a call from the New York State Homicide Squad. The wife of a notorious criminal has been admitted to a private psychiatric hospital and can no longer testify in his upcoming trial. Without her, their case will collapse but, amid reports that the staff are as unpredictable as their patients, who can the police trust?

In desperation, they turn to an outsider and now Gregory must find the courage to step inside the fortified walls of Buchanan Hospital to uncover the truth. The question is, will he ever be the same again?

Murder and mystery are peppered with dark humor in this fast-paced thriller set amidst the spectacular Catskill Forest.