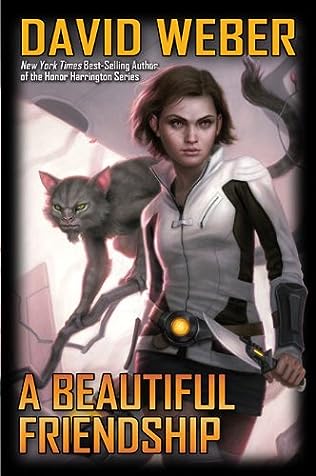 Stephanie Harrington absolutely hates being confined inside her family’s compound on the pioneer planet of Sphinx, a frontier wilderness world populated by dangerous native animals that could easily tear a human to bits and pieces. Yet Stephanie is a young woman determined to make discoveries—and the biggest discovery of all awaits her: an intelligent alien species.

Treecats are creatures that resemble a cross between a bobcat and a lemur (but with six legs and much more deadly claws). Not only are they fully sentient, they are also telepathic, and able to bond with certain gifted humans such as the genetically-enhanced Stephanie. But Stephanie’s find, and her first-of-its-kind bond with a treecat, brings on a new torrent of danger.

An assortment of highly placed enemies with galactic-sized wealth at stake is determined to make sure that the planet of Sphinx remains entirely in human hands—even if this means the extermination of another thinking species.