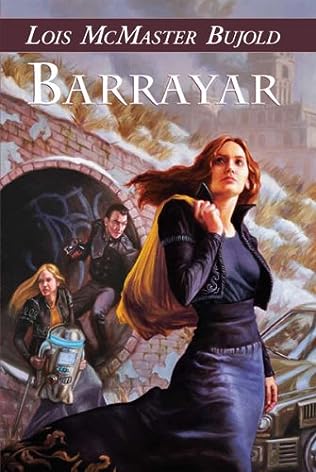 On opposing sides, Captain Cordelia Naismith and Admiral Lord Aral Vorkosigan marry and live in aristocratic splendor on his home planet Barrayar. Cordelia agrees with the dying old emperor that the Empire would be better if Aral would serve, but he knows secrets she does not.

Cordelia Vorkosigan’s plans for a peaceful married life (after all the bloodshed and trials recounted in SHARDS OF HONOR) are shattered when a poison gas attack, intended for her husband Aral, leaves her ill and her unborn child damaged.

Resisting enormous pressure to abort her son, Cordelia struggles to keep her unborn child–transferred to a uterine replicator–alive while thwarting plans by a ruthless opponent to murder the young emperor and assume absolute power over all of Barrayar. Once again Cordelia displays her courage and her remarkable combat and leadership skills. Winner of the Hugo Award for Best Novel.