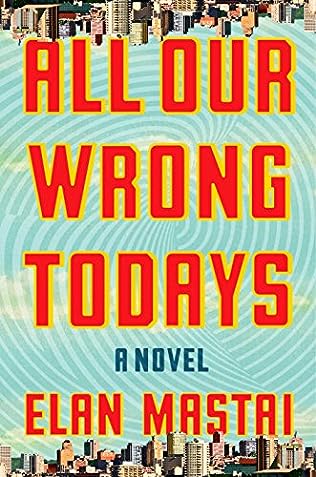 All Our Wrong Todays is the debut novel by the sci-fi author Elan Mastai. I’ve been in a time travel mood these days, so, as the book fits the genre, I picked it up to check what all the rage was about.

Afterall, the author is a well-known Hollywood scriptwriter, and this particular book sold to Penguin Random House for no less than $1.25 million.

The story centers on Tom Barren, a guy living in 2016 in an alternate universe. A parallel universe, if you may. One where the world is very different from our own. It is a high-tech society with flying cars and gadgets that we can only dream about. It’s what many of us would call utopia. Yet, Tom is far from happy. His relationship with his dad is distorted at best and his mother is no longer alive. His father considers him a major failure.

His father is an authority on time travel and through a weird accident, Tom makes use of the device to land in our parts of the world. A world that is weird, far less advanced than his own. Yet, with what gets to see here, it’s a world where he feels more at home than in his own world.

The problem is, soon he realizes that his actions are changing the history. And the more he is trying to right a wrong, the worst things get.

The story is amazing and mindboggling. It started a bit slow, but it soon picked up and I felt entirely drawn into Tom’s world. In a way, the book reminded me of another story I’ve read this year titled Dark Matter by Blake Crouch. It’s the same strangeness in both books, and I experienced the same WTF moments while reading them.

Tom is an interesting character. He was not my favorite at the beginning of the book, but soon I warmed up to him and rooted for him to fix what he screwed up by accident.

These last few years there has been an influx of time-travel and alternate-timeline books, and All Our Wrongs Today fits right in. Readers who love this sci-fi subgenre will be drawn to the book and even consider it one of their best reads of 2017.

All Our Wrong Todays by Elan Mastai is certainly one heck of a ride and I rate it right there up with Dark Matter by Blake Crouch, 11/22/63 by Stephen King, and Jodi Taylor’s Chronicles of St. Mary’s series.