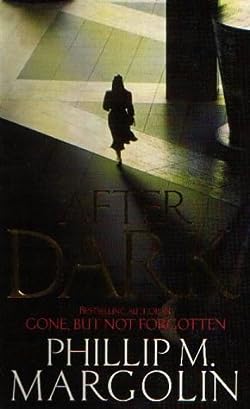 A judge brutally murdered. A star prosecutor indicted.  A dangerous obsession that emerges…

The first woman ever hired by legendary defense lawyer Matthew Reynolds, Tracy Cavanaugh cuts her teeth on a horrifying crime: the car-bomb murder of Oregon Supreme Court Justice Robert Griffen. Reynold’s client – and the chief suspect – is none other than the icy but celebrated prosecutor Abigail Griffen, the Justice’s estranged wife. Tracy’s research plunges her into a web of betrayal and revenge, of secret deals and hidden passions. At the heart of the case lies a twisted truth – and when the verdict comes in, she will discover that nothing is as it seems…after dark.

Laura Rizzatti, who works temporarily for Chief Justice Robert Griffen of the Oregon Supreme Court, is found murdered late at night in the abandoned courthouse. There are no suspects and no clues. The following month, Griffen himself is killed by a car bomb in the driveway of his Portland home.

This time, however, there is a suspect: In a shocking sequence of events, Abigail Griffen, the highly regarded prosecutor at the Multnomah County Prosecutor’s Office and wife of Chief Justice Griffen, from whom she wants to divorce, is charged with first-degree murder. guess …