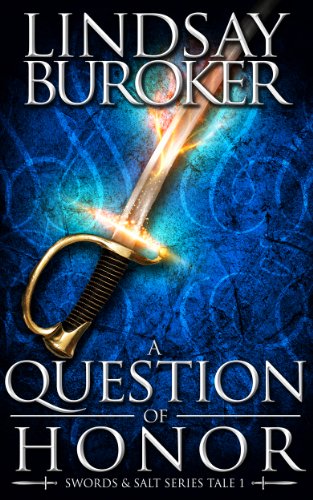 With less than six months until his entrance exams for the famed Nurian warrior-mage academy, Yanko is sent to his uncle’s salt mine for “hardening,” as his father calls it. He expects endless days of physical labor; what he doesn’t expect is to have to choose one of the mine’s prisoners as a sparring partner.

Not wanting his uncle to think him a coward, Yanko picks a big scarred man from Turgonia, a land known for its ruthless warriors. Only after his selection does he learn that he’ll be expected to kill his opponent… before his opponent kills him.

This short novella is an introduction to a new trilogy set in the Emperor’s Edge world, but in Nuria rather than Turgonia. Amaranthe and her team aren’t along for the ride this time, but there are equally interesting new characters and the dry, magic-using land of the Nurians promise to be quite a change from war-like and efficient Turgonia.